There are many reasons why companies looking to relocate or expand are attracted to Arizona. National rankings place Arizona #2 in the U.S. for workforce training, quality and availability while maintaining one of the lowest costs for labor in the nation. Arizona also ranks #1 for start-up businesses and #1 in higher education opportunities with a network of esteemed state universities, private and community colleges feeding the labor pool with young, highly educated talent. It is also one of the fastest growing financial hubs, rapidly emerging tech markets, and bioscience centers in the country. It has a minimal regulatory environment and low operating costs that are 40% less than neighboring California. And with its 300+ days of sunshine, Arizona offers a high quality of life with a low risk of natural disasters.

Still, when companies are looking at Arizona all too often they don’t look much beyond the Phoenix metro boundary. And if that’s true, companies may be missing a big opportunity in a small Native American community on the southern tip of the Greater Phoenix area. Here in the midst of the growth corridor between Phoenix and Tucson, the Ak-Chin Indian Community offers the best of both worlds: access to all the advantages of the state and the larger Phoenix metro area, and an industrial site that has even more of its own.

Currently, the Commerce Center has about 40 acres of immediately available leasable lots for owner-built or build-to-suit projects. Below market lease rates, tax advantages, and low utility rates are enough reason to give this site a good look, but the concept of building on leased land is new to some. Bottom line, what this means is little to no upfront expenses or initial capital outlay, so a company can start turning profits faster. 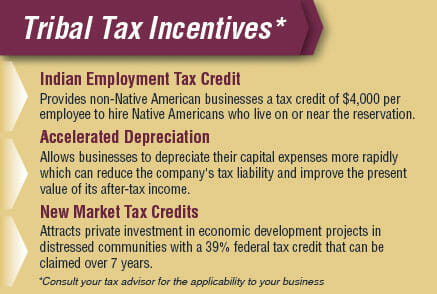 Also, unlike some other Indian reservations, Ak-Chin has no allotted land, so a potential tenant only has to work with the Ak-Chin Industrial Park Board, not individual land owners. The Board reports to the Community Council, similarly to the process in any municipality. What’s more, the Community maintains its own Planning and Zoning Commission, which can speed time to market with streamlined permitting and approvals.

Companies locating in Santa Cruz Commerce Center can take advantage of most of the state’s incentives and job training programs. In addition, a business on Native land may benefit from the Indian Employment Tax Credit, Accelerated Depreciation, and New Market Tax Credits. Companies in the Commerce Center also do not pay local or county sales taxes, taxes or adders on utilities, or real property tax on land used for commercial or industrial. Moreover, the Commerce Center is part of Foreign Trade Zone #75, which can reduce the cost on exports and imports. 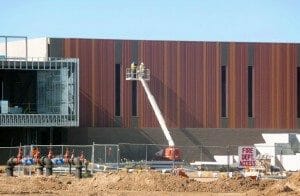 The Ak-Chin Indian Community gave the City of Maricopa $7.4 million for the development of its Copper Sky Recreation Complex. Ak-Chin has become an economic powerhouse in western Pinal County, Arizona, fueling much of the region’s economic development.

What makes the offering at Santa Cruz Commerce Center truly unique has mostly to do with the Ak-Chin Indian Community itself. With less than 900 reservation residents, the Ak-Chin Indian Community has become an economic powerhouse, fueling much of the growth in western Pinal County. In fact, people who work in businesses located in the Ak-Chin Indian Community predominantly live in the adjacent City of Maricopa, where the population has grown explosively from 1,200 to nearly 45,000 residents in just 10 years. With 46% of Maricopa’s population holding bachelor’s or graduate degrees and relatively high concentration of engineers, the City has a unique demand for urban experience and small-town camaraderie–most of which has been stimulated by Ak-Chin.

In addition to its own economic development projects, like the UltraStar Multi-tainment Center at Ak-Chin Circle and the Community’s new justice center, Ak-Chin also gave the City of Maricopa a $7.4 million gift for the multi-generational facility and regional park, Copper Sky Recreation Complex; and donated $2.6 million to the Maricopa Unified School District just in the last year. Ak-Chin has proven it is committed to developing its own economic self-sufficiency while also helping the surrounding region to thrive.

“At Ak-Chin, you’re just 32 minutes from all the services and amenities of metro Phoenix,” said Charles Carlyle, Ak-Chin Industrial Park Board Chairman. “But we have the best of both worlds if a company is just willing to look at the opportunity that exists beyond the typical metro area.”

Ak-Chin Featured As Gem of an Opportunity
Scroll to top