How do growing corn, cotton and potatoes prepare you to compete in a 21st century business environment? In the case of the Ak-Chin Indian Community, it’s all a matter of their Him-Dak.

In Ak-Chin’s native language, Him-Dak means way of life and firmly rooted in the tribe’s way of life is its background in farming. In fact, the word Ak-Chin comes from an O’odham word meaning mouth of the wash or place where the wash loses itself in the sand or ground, referring to a type of farming that is dependent on washes created by seasonal flood plains.

To be successful in this type of farming, Ak-Chin’s ancestral farmers had to become uniquely adaptable to changing climates and conditions. This resilience, which has been passed down through the generations, laid the groundwork for a business philosophy that today emphasizes economic diversification to capitalize on changing markets and commerce opportunities.

Originally sustained only by its agricultural activities, Ak-Chin’s rapid growth began with development of Harrah’s Ak-Chin Casino, which opened in 1995. Now as Pinal County’s largest employer, Ak-Chin generates an economic impact of nearly $437 million annually and that was before they added a 152-room hotel tower to the Casino Resort, the purchase and improvement of Ak-Chin Southern Dunes Golf Club, and completion of the $50 million UltraStar Multi-tainment Center at Ak-Chin Circle. 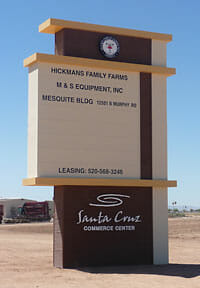 In addition, Ak-Chin agreed to a multi-million dollar investment in Quail Run Building Materials, Inc. of Phoenix to build a second site for the company in its industrial park, Santa Cruz Commerce Center. Conveniently located between the cities of Maricopa and Casa Grande less than five minutes from its regional airport, the fully improved industrial park offers approximately 50 acres of immediately leasable land with a build-to-suit option for qualified tenants. Quail Run will join neighbors, Hickman’s Family Farms, M&S Equipment and others, who already enjoy tax advantages and below market lease rates that have enabled them to grow and expand.

Charles Carlyle, Chairman of the Ak-Chin Industrial Park Board, which oversees the development, improvement and leasing of the Community’s industrial properties, said, “Our agricultural heritage taught us to be adaptable or we would not have survived. The same thinking applies to growing industry in our Community: we need to diversify to foster our long-term sustainability.”

According to Carlyle, it is because of this Him-Dak, the Ak-Chin Indian Community is not just surviving; it’s thriving.